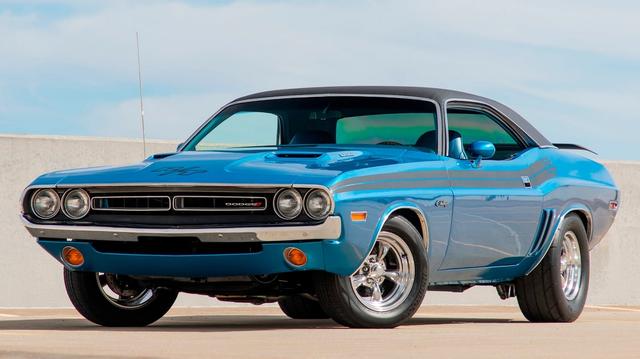 Having taken their time building this one-of-a-kind 1971 Challenger R/T Resto Mod, Al and Gloria Longmire went to great lengths to ensure it would be something that could be driven and enjoyed, used on the street or the track. Case in point, it has a fully adjustable suspension comprised of Ridetech adjustable shocks for leisure or competition, a Reilly Motorsports Street Lynx 4-link rear suspension with coilovers and, thanks to the overdrive, it rumbles along around 2,200 RPM at 70 MPH in spite of the new Moser 8.75 nodular 33-spline big-axle 4.10 Tru-Trac rear end.

With a lengthy history in drag racing, engine building and the car community in general, Al is currently the curator of the Dahl Ford Car Museum in Davenport, Iowa, overseeing a 90-plus collection of well-preserved cars. Randy Pribyl bought the car from the Longmires while they were still building it, and while he’s well known in the GTO circles, having served as a concours judge and written many articles on the Pontiac, he’s quick to point out that his second car was a 1969 Plymouth Road Runner painted B-5 Blue. His first car was a GTO.

Since the completion of the restoration more than two years ago, more than 3,000 miles were put on the Challenger to ensure everything was well and good. At about 2,000 miles, they revisited all the nuts and bolts from front to back, making sure all were secure. The mechanicals in the doors were also lubed and adjusted to make sure the windows, locks and handles work better than new. This R/T spent its life in southern Missouri, New Mexico and Texas, so the metal is delightful. Interestingly, this Challenger was painted the same color as Pribyl’s Road Runner when it rolled off the Hamtramck, Michigan, assembly line on April 13, 1971: B-5 Blue.

A factory R/T, this Challenger was equipped with a 340 and 4-speed, tachometer, factory air, quick ratio power steering box, power front disc brakes and a black vinyl top, and it was sold to Scott Teel on May 29, 1971, through Al West Chrysler in Rolla, Missouri, which is still in business. Today, the Challenger stands far from what it was in 1971, having received a frame-off restoration and build completed two years ago. Some of the more noteworthy additions to the Challenger are the 6.1L Hemi crate engine from Indy Head, a Tremec TKO 600 5-speed manual transmission, hydraulic clutch and Wilwood 4-wheel disc brakes. Dyno tested at 450 HP, the car only weighs 3,410 pounds, some 750 pounds less than a modern Challenger, ensuring that the car will indeed move very swiftly.

The engine is enhanced with TTI Coated Headers and a K&N high-flow air intake system, and the alternator and Vintage Air AC compressor have been relocated below the engine for a cleaner appearance up top. Nicely, it also runs on 91 octane fuel. A unique feature of the exhaust is the H-pipe, which can be switched open for a little more horsepower or switched closed for a little more growl at the touch of a button, making it a different proposition that traditional headers. A Champion aluminum radiator with electric fans keep the engine running cool, and a modern fuel tank with an in-tank pump keeps it well fed. Creating a stiffer chassis and body, frame extenders were used to convert this car from unibody to a full-frame design. Inside, passengers will enjoy supportive seats and innumerable custom details and modern touches that set this car far apart from the crowd.

Wow, this Challenger is simply amazing! Someone's going to be a great ride!